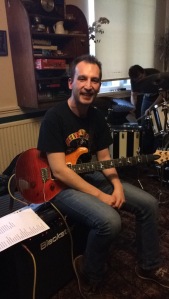 Ready to Rumble in Edinburgh

Born in Edinburgh, Scotland (in that favourite of years, 1984) under a shooting star, magical powers were bestowed upon me which came to fruition years later in the form of deep musical insight. Midway through secondary school I came home to find Guns N’ Roses’ “Sweet Child O’ Mine” playing on VH1 Classic on the TV. That was the moment a generation will now remember. The power of that song, the imagery, the raw rock. When I saw and heard Slash play on that most fabled of days, I knew I had to pick up the mantle and fulfil my destiny. Take the baton and win the race.

Up until this point I had been listening to “Now” albums on tape, on my little Sony Walkman. Think “2 Unlimited,” “Ace of Bass” etc. Good music. So the day after the dawn of realisation, I went straight to Woolworths and sought out the best album of all time: Appetite for Destruction. It was the first CD I had ever bought. I was a little embarrassed as I felt the music was not popular and tried to hide it as I took it to the checkout. Then the guy at the checkout blurted out loudly “Appetite for Destruction – great album”… I rushed home to listen to it, reading the liner notes and absorbing it all.

The day after that I went to Argos and bought my first guitar. One of those cheap nylon-string jobs with incredibly high action. I took lessons at school (one a week for 30 minutes) which lasted maybe one year but was largely self-taught. People say now is a great time to learn but I actually think there is information overload which can impede progress. I’ll detail learning resources in another post. In any case, I had the time at school to play for at least 6 hours a night. I started by getting tab books and learning albums. Then I started to get into the theory a bit more. I joined a few school bands and started posting on internet forums. Through this I met some great people and attended guitar events. At one of these events a bassist asked if I fancied writing some songs with him (across the great divide of Scotland and England!) and I naturally said “yes” – this was the basis from where my upcoming album “Thomas” came. Some songs were co-written and others came about through projects I was recording for online.

I mainly play rock music – it’s what gets me going. It’s important to know what you’re good at and have that driving force, stemming from music you genuinely like listening to. I dabbled in jazz (mainly for the theoretical side of things) and flamenco (such passionate music) but realised that I had best stick at what I’m good at (for now). After leaving school I very nearly studied music at University, but instead decided to opt for a different subject. So music remains my passion outside of work, and I can now afford nice guitars!

These days I play in an Edinburgh covers band. I’m still learning (you never stop). And my immediate goal is to release a CD I’ve been working on for years now (one of those things that drags on until you put serious effort into it). I’ve more than enough material for another two CDs so let’s see what happens in future.